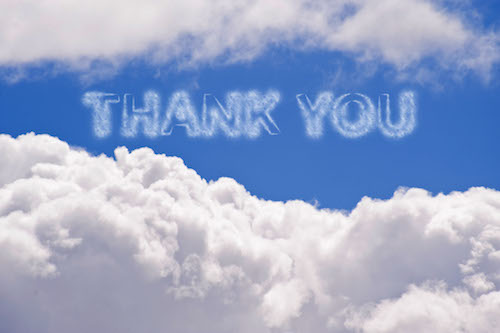 Two Little Words: The power of thank you

When did you last say thank you? The chances are, it wasn’t long ago. Most of us say those two words many times a day: buying a coffee, arriving at a meeting, eating dinner. We say it often, but what does thank you actually mean?

It’s easy to say two words, but a real thank you is about much more than two words. Thank you has a power that can bind people together and increase the mental wellbeing of both the thanker and the thanked.

BBC radio has a weekly ‘thank you’ slot. Listeners write in with a thank you story, in which they thank a stranger for helping them. Sometimes, the act of kindness that the listener wants to say thanks for happened as many as forty years earlier. Some stories are relatively trivial, such as someone saying thanks to the person who helped them while they were seasick on a ferry. Others are significant, such as someone who was taken in and fed when they were a vulnerable teenage runaway.

In all cases, the listener has felt, whether for days or decades, that they should have said thank you for something, but failed to. Despite the fact that it’s unlikely the person they’re thanking will happen to be listening when their thank you is broadcast, they still feel compelled to do it. They’re saying thank you because they feel it’s important, regardless of the outcome.

Making a point of thanks

Some people make a point of thanking others regularly. One such is Doug Conant, former CEO of Campbell Soup. He spent a significant amount of time hand writing notes to his employees thanking them for achievements, personal or professional, silly or noteworthy. During his time at Campbell he wrote 30,000 of these notes. The company had 20,000 employees.

When Conant was later involved in a near-death car-crash, he received thousands of hand-written notes of appreciation from former employees. So, by saying thank you regularly, and honestly, he built a culture of gratitude that benefitted himself and thousands of others.

The ties that a thank you can bind

When you thank someone, you create a relationship with them, however brief. To thank someone is to acknowledge that they have played a part in your life. It’s so easy to say the words ‘thank you’, that it’s equally easy to fail to see their meaning.

Thank you is a shortened version of the more personal, ‘I thank you’. The word thank was derived from think, so the original meaning of thank you can be translated as ‘I think favourably on you, for what you have done for me’.

The power of thanks

Saying thank you creates a connection between two people. It means that a good deed is acknowledged and remembered. It is a potentially powerful act, and so is the act of choosing not to say thank you.

Dacher Keltner, in his book, The Power Paradox, identifies some of the ways in which a thank you can create lasting benefits for both thanker and thanked. People who were thanked for the work they do, for example, were twice as likely to volunteer for more. Students who were thanked by their teacher were up to five times more likely to try hard when solving problems than those who weren’t thanked.

But the paradox, according to Keltner, is that while leaders are usually happy to thank people on their way up, once they’ve attained a position of power, some will stop thanking people, feeling they no longer need to do so. This is a problem, because it means that the organisations they lead lack the social glue that gratitude brings.

The virtuous circle of thank you

Most of us understand that saying thank you makes people naturally more receptive to us, hence why Keltner’s study found that people are happy to thank others when they need their help. But when people are thanked, they also become more likely to help people who haven’t thanked them. They display what psychologists call prosocial behaviour: they’re willing to help others because they feel it’s important to do so, rather than because there is a direct benefit to them.

Imagine a group of people in which no-one ever expressed thanks. The group would fall into acrimony fairly quickly. Communities, including workplace communities, need gratitude in order to function. They need acts of kindness and appreciation to make them whole.

If you can show your appreciation to people, and mean it, both you and they will benefit. And, like Doug Conant, or the people being thanked by radio listeners, you’ll find that your appreciation will have beneficial ripples many years later.

How do you say thank you in your organisation? Let us know.