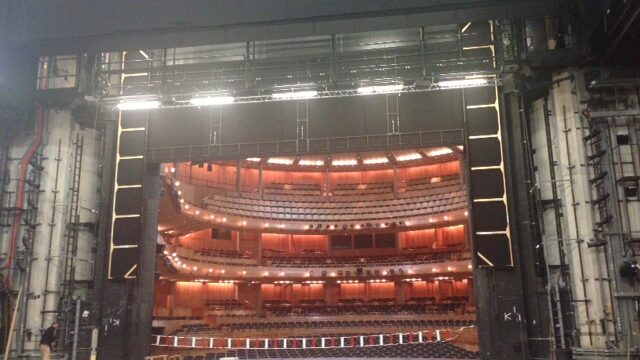 “When we had these floorboards cleaned a few years ago, we had to lift them and we found all sorts of things underneath. The room was used as a dorm for evacuees during the war and we found little letters written by children, tin soldiers, anything that could be pushed between the floorboards. They’re now in our archives and you can see them in our museum”

As the guide to my recent ‘behind the scenes’ tour of Glyndebourne indicated the magnificent 2 foot wide floorboards and shared this anecdote in the old Green Room, the gap between 1944 and 2013 narrowed and the scene of young children, separated from their families, sheltering from the bombs, appeared very real to me.  Little did the children know that, decades later, others would appreciate their endeavors and find meaning in the connection. This was an extra layer of richness in the tour of Glyndeboune, an opera house deep in the English countryside and a short drive from where I live.

When we lifted the floorboards in our own home to do repairs some years ago, we discovered that, at one point, a builder had left a pile of rubbish underneath – pieces of cement, rubbish bags, bits of brick. There was so much of it, I even wondered if the builder had left them there as insulation. It took several trips to the municipal waste centre to get rid of it all and I realised it was less about insulation and more about sloppy finishing off. Little did he anticipate the cursing that would meet his hidden shortcuts, years later.

I discovered recently that an architectural practice, BBM in Sussex, has been using old toothbrushes and videos, things we typically dispose of into landfill, as insulation in a prototype house as part of developing new methods of sustainable construction and new ways of using materials. This is intentional re-use of waste and BBM’s practice freely allows a look behind the scenes, indeed encourages it to promote its mantra of the 3 Rs: “Reduce before you Reuse before you Recycle”. BBM invited the cameras in, involved schools and the community and Duncan Baker-Brown, one of the practice partners, gives talks about what’s ‘behind the scenes’ in their approach.

In any organisation, there’s a ‘behind the scenes’ going on. People and processes making things happen. I’m a devotee of ‘behind the scenes’ perspectives. I marvel at the preparation, the planning and the passion that go into designing or making something, whether it’s a product, a service, a performance or an experience. ‘Behind the scenes’ tells a story and invites you in to discover a perspective that you may not realise when you first discover something. It tells you much about a company or organisation. It reveals its culture, passions, beliefs and values and the extent of meaning and innovation.

If someone were to go behind the scenes of your team, your organisation, your product or service and even go so far as to lift the floorboards, what would they find?

Are you intentional and open about what you do? And how you do it? Would you feel pride at what’s to be discovered? What’s behind the scenes in your team, in your organisation?